A trio of terriers sit against a white backdrop.

If you’re a lover of small dog breeds, you know that bigger isn’t always better. These little bundles of joy can be the perfect fit for families in all sorts of situations. Whether you’re looking for an energetic companion or a lap warmer, odds are there’s a small dog for you!

Small Dogs That Don’t Shed Much

Small dog breeds are perfect for small environments, such as an apartment. Living in a small space, however, means that fur and dander can quickly pile up. Fortunately, their size often means that small dogs won’t leave a large pile of hair. If you’re looking for a little pooch that won’t clutter your space, here are a few small dogs that don’t shed.

Also known as “weiner dogs,” dachshunds are low-maintenance. Their short coats are easy to maintain and shed only minimally. Baths are usually only required if your dachshund has gotten into a mess!

Playful pugs love to be the center of attention. Their high energy can make them a handful, but their short coats mean minimal vacuuming. Plus, when it’s time for cuddles, you won’t need a lint roller to clean yourself off.

Although they have longer coats than the previous members of this list, maltipoos still score low when it comes to shedding. They do need more regular grooming, however. Keeping their coats trimmed will help your maltipoo cool off and stay clean.

Miniature schnauzers are one of the best small dog breeds if you’re not a fan of shedding. Not only do these dapper dogs rarely leave fur behind, but they’re also hypoallergenic. That means they have low dander, which is what triggers dog allergies. 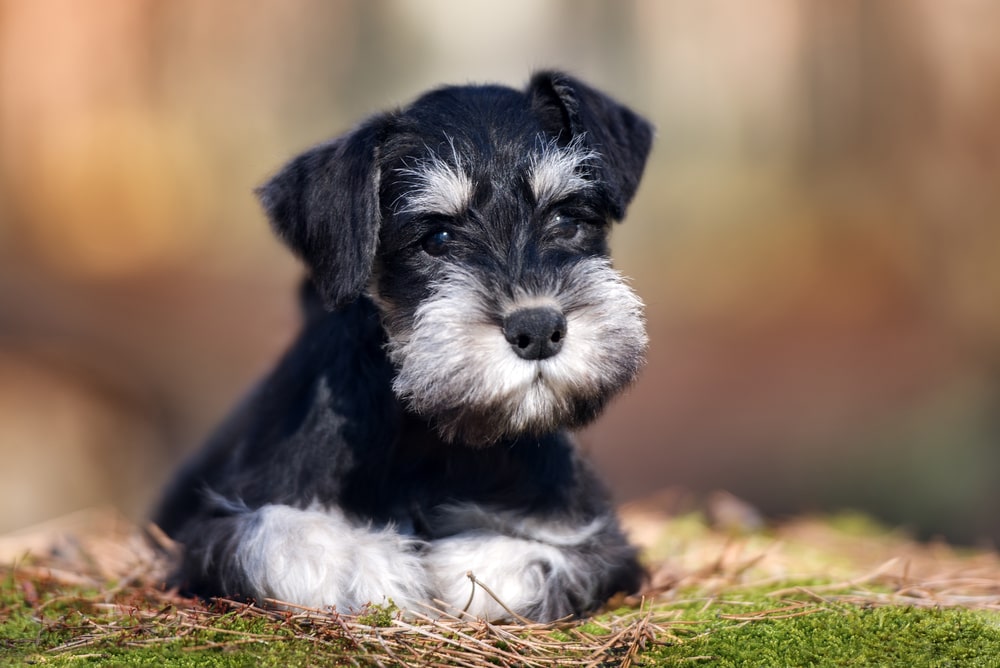 Small Dog Breeds That Are Easy To Train

Just because a pup is small doesn’t mean they can’t still be a handful! Teaching your dog some basic rules is a good way to ensure they don’t get into too much mischief. These types of small dogs are particularly fast learners.

These dignified dogs are highly intelligent. That makes the Lhasa apso a fast learner, as long as you keep them entertained. Mental stimulation is just as important as physical drills.

One of the many members of the terrier family, Boston terriers don’t exactly have a reputation for being perceptive. Despite that, they still possess a keen intelligence and can be quick on the uptake. Repetition is key, along with a gentle approach.

Energetic and affectionate, the Maltese will love spending time training with you. Scolding should never be your first approach, but be especially careful with your Maltese. Their gentle and loving nature makes them particularly sensitive to a harsh tone.

A white maltese puppy sitting in a room with blue walls and looking up expectantly. 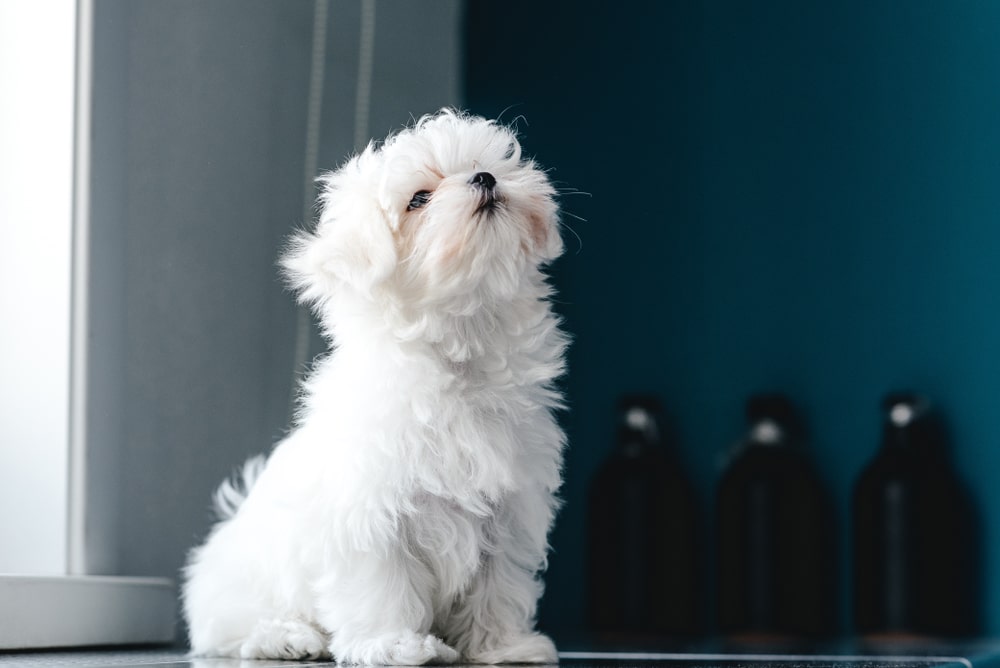 Many people perceive small dogs as buzzing bundles of energy, but that’s not true for all of them. If you’re looking for a companion to keep you active, consider these small dog breeds.

Bred for hunting, Jack Russell terriers are high-spirited and inquisitive. They love to play and explore, and may give even the most active pet parents a run for their money. Lots of busy toys are recommended.

“Judge me by my size, do you?” They may be a small dog, but miniature pinschers have an outsized sense of confidence. This, plus boundless energy, makes them perfect watch dogs. Just keep an eye on them — they can sometimes be too clever for their own good!

One of the most popular small dog breeds, beagles are loved for their playful nature and high level of sociability. Your beagle will love meeting new people. As another hunting dog, they’re always looking for something new to explore.

The Havanese is a lover. Whatever you’re doing, they want to be a part of it. This can sometimes manifest as separation anxiety, so playtime and cuddles in equal measure are recommended for this breed.

A havanese sits on a gravel path in a green forest. 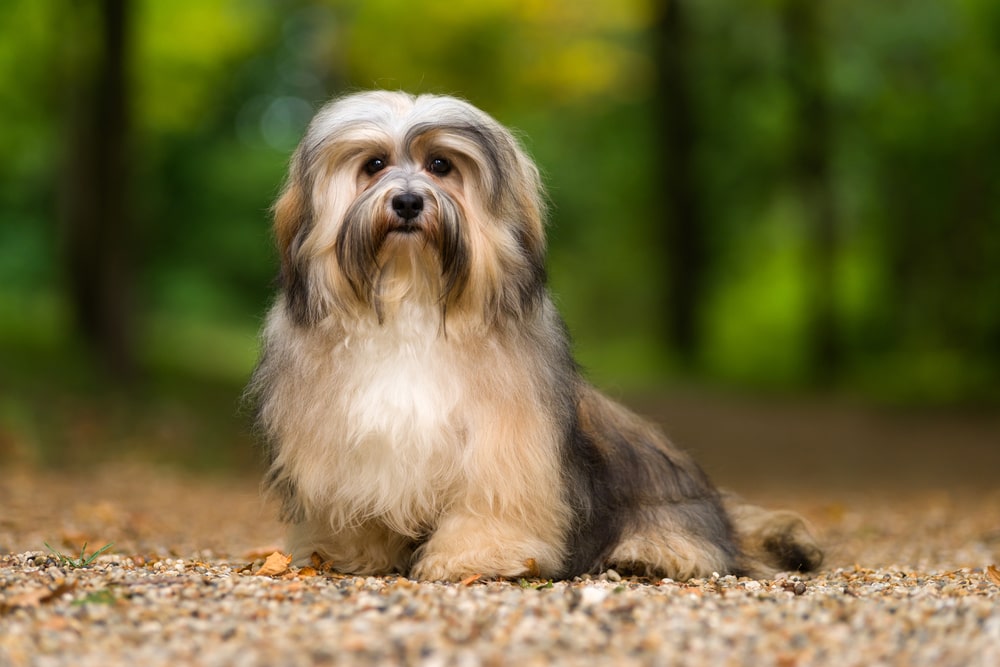 All dogs can become sick or injured, but small dog breeds are especially prone to getting certain conditions. Be aware of the following common concerns.

Otitis is a chronic inflammation that occurs in the middle or external ear canal. It can be common among dogs with floppy ears, a characteristic that many small dog breeds share. If you have a Yorkshire terrier or similar pooch, keep an eye out for the symptoms: persistent head shaking and a bad smell. Fortunately, most cases of otitis can be easily treated once diagnosed.

Intervertebral disc disease, or IVDD, is the result of extended spinal issues.2 Many small dogs experience back issues due to their short stature. IVDD is an exasperation of these issues, causing the spinal discs to rupture. Chihuahuas are especially susceptible to IVDD. Symptoms can include noticeable pain, incoordination, and rapid onset paralysis. In extreme cases, surgery is often the only option.

Known among humans as “pink eye,” conjunctivitis is the inflammation and infection of the conjunctiva, a mucosal membrane that surrounds the eye.3 Small dog breeds with shallow eye sockets, such as the shih tzu, are much more vulnerable to conjunctivitis. It can easily be recognized by squinting, discharge, and redness or swelling around the eyes. Fortunately, it can also easily be treated with topical and oral medication.

The signature squished face that makes small dogs like the French bulldog so adorable can also be the cause of respiratory issues. Brachycephalic Airway Syndrome is the result of abnormalities in the upper airways of dogs that have been bred for certain physical characteristics.4 There are several ways the syndrome manifests, including abnormally narrow nostrils, laryngeal (voice box) collapse, and a smaller-than-normal trachea. All of these make it more difficult for these dogs to breathe. When it comes to treating Brachycephalic Airway Syndrome, anatomical abnormalities can be resolved with surgery. Other measures, such as managing the dog’s weight or prescribing anti-inflammation medication, can only provide short-term relief.

Legg-Calve-Perthes disease is relatively rare, but occurs more frequently among small dog breeds. Young Pomeranians are especially prone. Legg-Calve-Perthes causes blood to stop flowing to the head of the femur, leading to the degeneration of the hip joint.5 The exact cause is unknown, but is suspected to be hereditary. Treating Legg-Calve-Perthes requires invasive surgery and even a total hip replacement.

An orange pomeranian runs excitedly across a brick sidewalk. 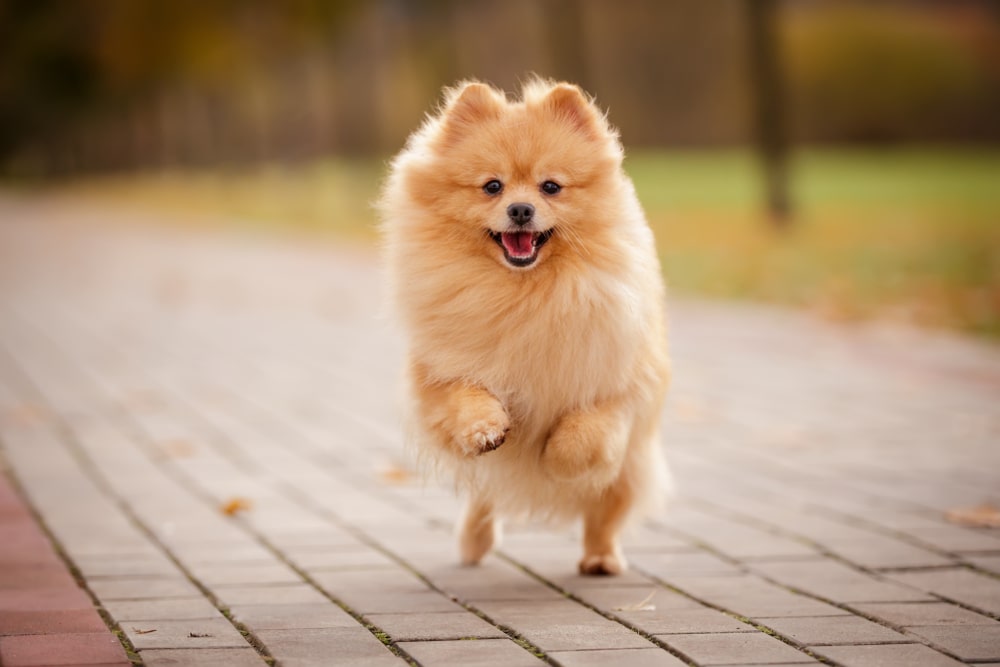 Adopting any dog, no matter the size, means taking on a lot of responsibility. Pet parents have a duty to keep their furry family happy and healthy. Unfortunately, the cost of doing so can often become unmanageable. Investing in a dog insurance policy while your pup is young is a smart way to prepare for the unexpected. Learn more about what MetLife Pet Insurance can do for you and your pooch.1

Enroll in 3 Easy Steps
Get a Quote

Nothing in this article should be construed as financial, legal or veterinary advice. Please consult your own advisors for questions relating to your and your pet’s specific circumstances.

5 “Getting closer to the cause of Legg-Calve-Perthes disease,” Cornell University College of Veterinary Medicine