A Norfolk terrier lies on its back while a vet presses a stethoscope to its chest.

Parvo Treatment Cost: What to Expect

Four minutes Sep 12, 2022
by
MetLife Pet Insurance
Parvo in Dogs: What is It?

Canine parvovirus type 2 (CPV) is a potentially-lethal infection that can strike puppies 6 – 20 weeks of age. Modern vaccines have made it a much less dangerous threat. In the case of infection, however, the parvo treatment cost can exceed $1000. Keep reading for a breakdown of treatment costs, as well as how to prevent parvo.

Parvo in Dogs: What is It?

CPV first emerged in European dogs in 1976.3 It took only 2 years to become a worldwide epidemic. Its exact origins are unknown. The parvovirus has also been found in wolves, coyotes, foxes, skunks, and racoons. It’s theorized to have come about as a mutation of feline panleukopenia virus (FPV). If left untreated, CPV attacks the gastrointestinal tract in young dogs. A rare variant of the virus can also cause inflammation of the heart in newborn pups.

Pups usually encounter the parvovirus in shelters and other environments that bring them into close contact with other young dogs. Because it can also infect wild animals, however, your dog could be exposed to CPV while exploring the outdoors. An infected animal will shed enormous numbers of the virus. Add to that the virus’s ability to live for months outside its host, and you have the perfect storm for a highly contagious disease.3

Once it has found a host, the parvovirus incubates for 3 – 7 days. It will seek out rapidly dividing cells to help propagate copies of itself throughout the body. As such, parvovirus often attacks the lymph nodes, invading white blood cells so that it can be carried through the vascular system. This has the added effect of causing the host's body to target and destroy many of its own white blood cells, essentially crippling its immune system.3

From the bloodstream, CPV targets additional tissues like bone marrow and the lining of the small intestine, called the epithelium. This prevents the intestine from replacing dead epithelium cells with new ones. As a result, the host is unable to absorb nutrients. In severe cases the lining becomes thin enough to allow intestinal bacteria to spread to other parts of the body. Septic toxins enter the bloodstream and, unhampered by an already-weakened immune system, can lead to septic shock and death.3

Dogs with CPV will display a number of rapid-onset symptoms, including:3

If you notice any of these symptoms in your pooch, schedule a vet appointment right away. Your vet will administer a simple fecal enzyme-linked immunosorbent assay (ELISA) test to help determine if CPV is the culprit.3 This can cost between $40 and $100, plus $130 for additional blood work.4

Parvovirus in Dogs: How it’s Treated and What it Costs

CPV can be scary, but if your pooch does become infected, the prognosis need not be grim. What matters is how quickly you get them diagnosed and started on treatment.

Your dog will likely have to spend multiple nights hospitalized as the vet administers an IV to help replenish fluids lost during vomiting and diarrhea. Anti-nausea and anti-diarrheal medications may be administered as well. Because CPV can cause septic shock, your dog may also be given antibiotics to combat additional infections.4

Treatment for CPV has an 80% – 90% survival rate.4 As long as your dog begins treatment quickly, the odds are good for them to triumph against the parvovirus. But it won’t be cheap.

An itemized bill for parvo treatment would look something like this:4

Lodging and quarantine from other animals is by far the largest expense. At the lower end, you can expect to pay around $860. That’s if your pup only has to stay a single night at the clinic. In all likelihood, it will be a stay of 3 days or more to administer treatment and observe your dog’s recovery. That puts a more realistic estimate at $2,100 or more.

A vet pets the face of a Siberian husky, who sits on an exam table and winks at the camera. 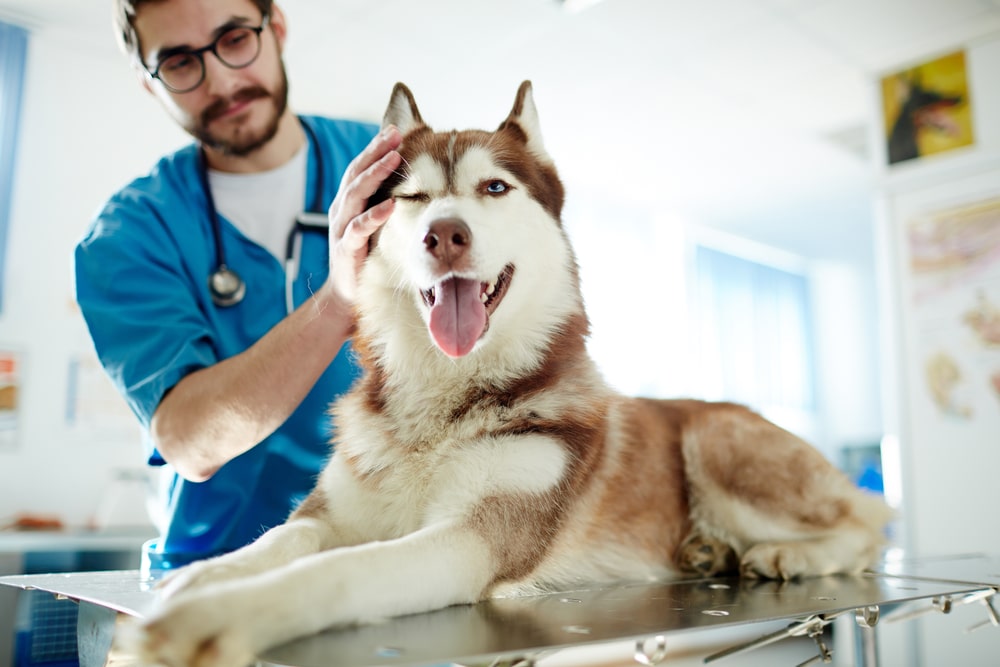 How to Prevent Parvo

Fortunately, the parvo vaccine has come a long way since the virus first arrived on the scene in 1976. Because the virus is so lethal and can spread so quickly among a population, the parvo vaccine is considered a “core vaccine” — an essential immunization recommended by all veterinarians. Core vaccines are administered in rounds, starting at 6-weeks-old and lasting until a puppy reaches 16 weeks. Your pup will need a parvo vaccine booster 1 year later, and additional boosters every 3 years following.3

The cost of vaccination is much lower than the cost of treatment. Plus, it spares your dog the trauma of illness and recovery. The best thing you can do for your furry companion is to keep their vaccines up to date. The second-best thing would be to get dog insurance. Accident and illness coverage from MetLife Pet Insurance means you could be reimbursed for some or even all of the parvo treatment cost.1,2 Plus, with optional wellness coverage, a MetLife policy could also cover the cost of vaccination.5 Learn more about what pet insurance covers to see if it’s right for you and your pooch.

Enroll in 3 Easy Steps
Get a Quote

Nothing in this article should be construed as financial, legal or veterinary advice. Please consult your own advisors for questions relating to your and your pet’s specific circumstances.

2 Provided all terms of the policy are met. Application is subject to underwriting review and approval. Like most insurance policies, insurance policies issued by IAIC and MetGen contain certain deductibles, co-insurance, exclusions, exceptions, reductions, limitations, and terms for keeping them in force. For costs, complete details of coverage and exclusions, and a listing of approved states, please contact MetLife Pet Insurance Solutions LLC.

5 Can be purchased at an additional cost.